Hypercore Beam - Break Through NAT With This One Weird Trick 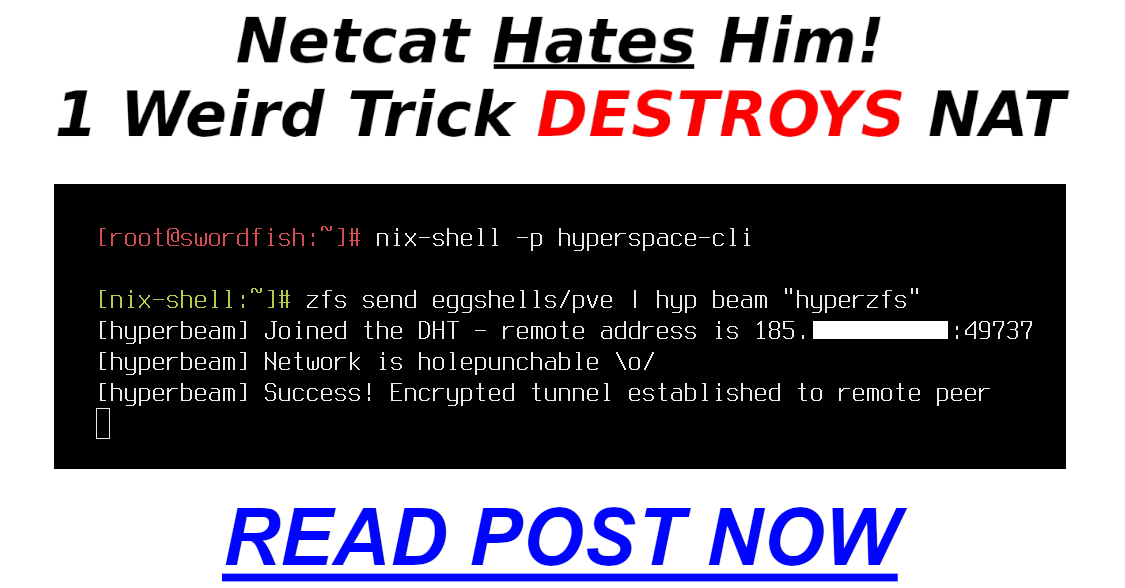 hyp beam can be thought of as a drop-in replacement for nc, for those situations where you just can’t be bothered to set up a VPN or manually establish a path between two machines via traditional methods like port forwarding. It provides the user with a method of breaking through NAT and transferring data via the Hypercore protocol between two machines, peer to peer, anywhere in the world. Peer discovery happens via DHT/mDNS using a concept called Hyperswarm, not too dissimilar from what Bittorrent clients have always done; although its usage of mDNS is quite unique and cool.

Hypercore Beams are end to end encrypted. There’s no overhead that I can measure, and it can be used directly in place of netcat. IP Address, network conditions, network port, all cease to matter since with hyp since we only care about piping data between processes. A shared secret you pass to the command which can be as simple as a set of words is used as an identifier, in place of an IP address. So what are some of the things I use it for?

Sending ZFS datasets around the internet⌗ 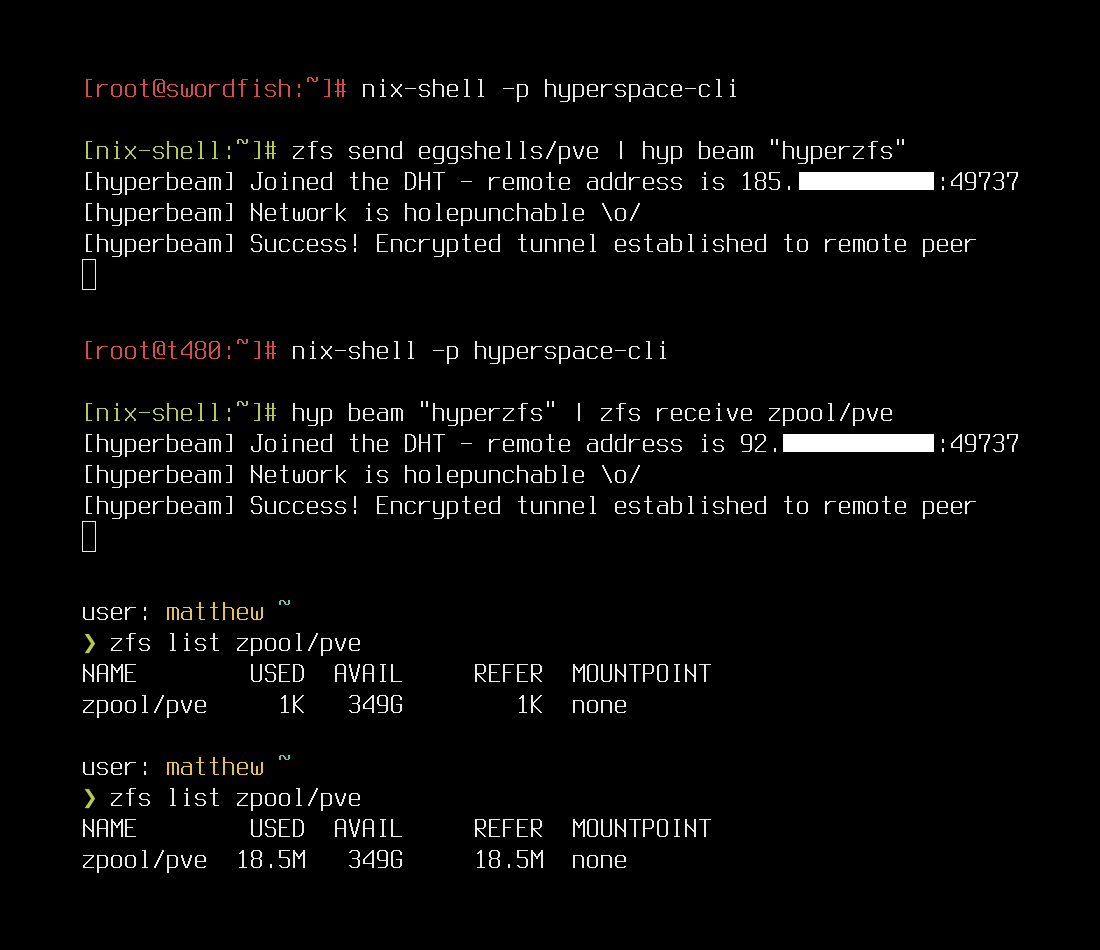 Usually, zfs send requires LAN connectivity, or a VPN, which is a pain to think about. Why think about where your machines are? With hyp beam I can just push and pull ZFS datasets through an encrypted tunnel without caring where I am in the world.

Sidenote: I call one of my pools eggshells because often whenever I interact with it, it’s like walking on eggshells.

Video streams over the WAN⌗ 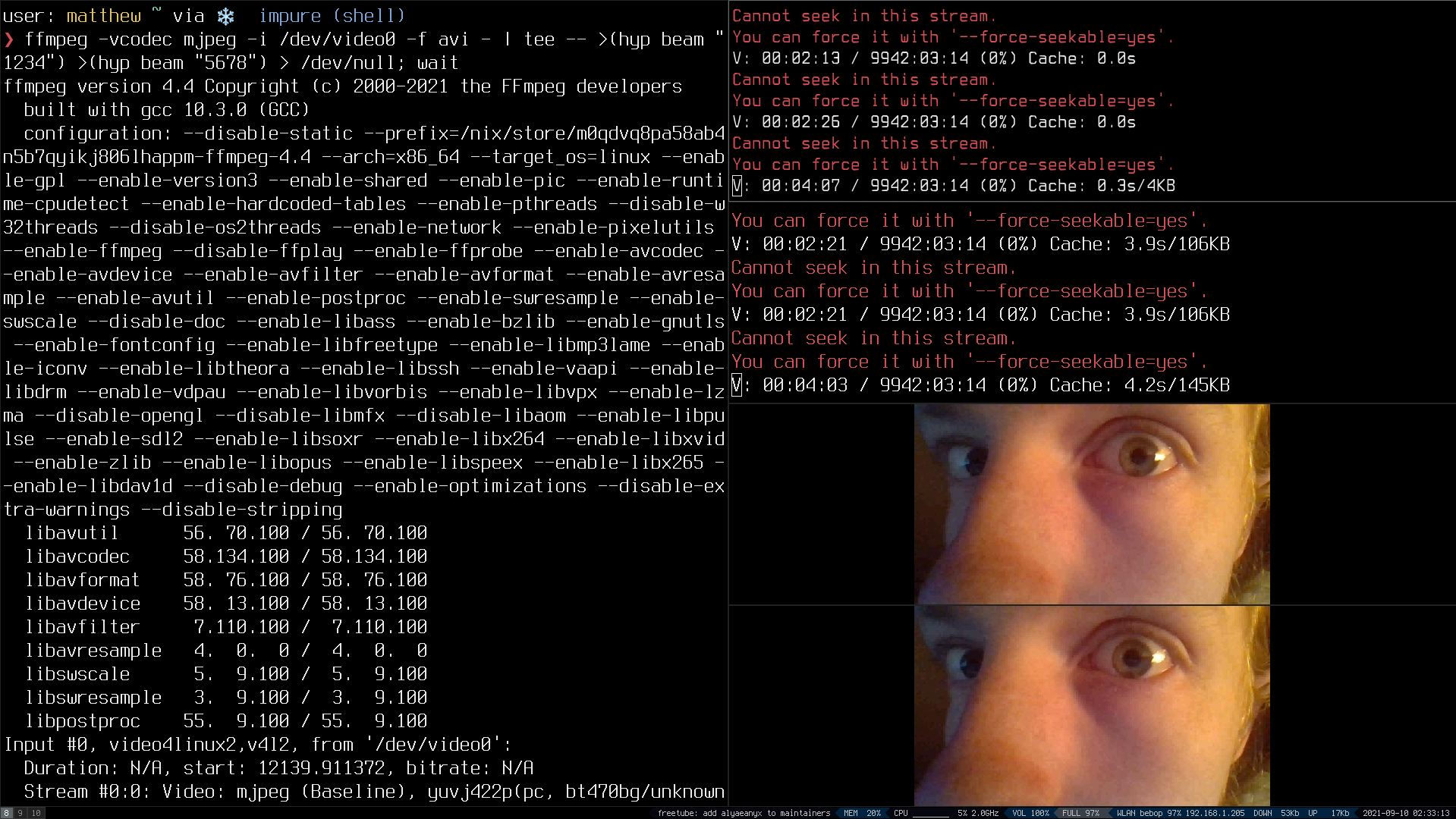 Sending Video over hyp beam is surprisingly practical. It’s a good demonstrator of how hyp beam can be used in place of nc. Once you realize that this is just a peer to peer link to send data through with no overhead, it ceases to be impressive. The ease of use is what is amazing.

The following will use fancy bash wankery to create two FIFO pipes with which to transmit video data from ffmpeg through. Such that two clients can watch the video via Netcat, or anywhere in the world via Hypercore.

This requires you to know the IP address of the machine, and have a direct connection via LAN/VPN.

This does not require knowing the IP address of a machine, or having a direct connection via LAN/VPN. It will work between two machines anywhere in the world and is likely to succeed even when it encounters firewalls. The port also does not matter, because we only care about the data being piped into a process.

Sometimes I want to share folders or files with friends that are on macOS/Linux. Usually I would use magic-wormhole for this, but one of the annoying things about that program is that if you want to send a folder it first has to be zipped. That zip process can take a very long time and requires you to have as much RAM as the filesize you are trying to send. It also doesn’t even give you as good of a compression ratio as gzip. Since hyp beam only cares about piping data, we can make up our own method of sending the folder, by using tar.

You could easily invent shell aliases such as send-to-matt or receive-matt ready to pack/unpack files, hiding the tar command from sight such that this feels like a proper application for sending and recieving files rather than having to remember the tar syntax each time.

What will you use it for?⌗

Read other posts
← Godot's Export to Android: Easy with Nix NixOS + the Worst UEFI ever (S5520UR) →